I am a Christian.

I worked from the summer after 9th grade until the first semester of my sophomore year in college at the BJU IT department in the software services department. During that time, I worked mainly on writing Java code for BJU's StudentCentral student information system, as well as some other Java apps. I also worked with a platform called OutSystems to develop a number of new applications during the later part of working at BJU.

During the summer of 2017, I interned at Infor, writing serverless applications on AWS. The main application I worked on was called Windsor, which helped automate deployment and testing of Infor's main software products. In the last few weeks of my internship I worked on writing some chatbots to make using Windsor easier and to help with support.

During my senior year of college, I worked an internship at VisioStack, Inc, and I was hired as a data scientist after the internship. In this job, I have worked mainly on Computer Vision, Machine Learning, and serverless cloud architecture.

I have been able to participate in a society activity at BJU called scholastic bowl, where teams from different societies compete to answer questions from all areas of study in a format similar to Jeopardy. My team was blessed to win the championship for two years.

I lost about 70 pounds during the summer of 2017. You can learn more about the program I used here. 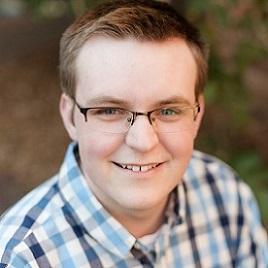